A large and impressive fortress on the top of a hill.

At an elevation of 220 meters, it is one of the highest elevations in southern Chios.  Its position offers the possibility to survey the plains of Kalamoti and Armolia, as well as the sea around Komi.

It was built in 1440 by the Genoese Nikolao Justiniani and is trapezoidal in shape, with double walls and small defense towers. Inside there were water cisterns and 62 rooms, as well as a church.  As we walk around inside the fortress, we can see the ruins of the rooms, the remains of the defense towers with their loopholes, which stand on the eastern and western side, as well as a major part of the well-preserved south wall, which is quite tall. Inside, at some distance from the south wall, there is a lower defense enclosure, which obviously was built in order to make it difficult for enemies to approach, since without it would have been quite easy to get as far as the main walls, due to the relative regularity of the slope. By contrast, access from the north was more difficult, due to the sheer cliff. The northeastern tower has large rounded windows, which may have served as entryways by means of rope ladders, as was the common practice. 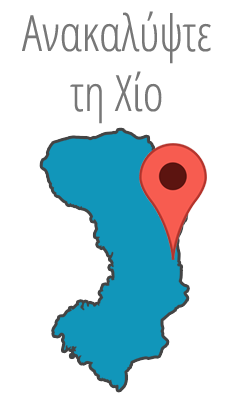