The Daskalopetra rock, which is located at Daskalopetra beach in the area of Vrontados, is one of the island’s most well known archaeological sites and it has always been a sightseeing attraction. Tradition links it to Homer and is considered to be the area where the great poet used to teach.

Chios is one of the seven cities (Izmir, Chios, Colophon, Ithaca, Pyrgos, Argos, and Athens) that are claiming Homer's origin. It is considered to be the most likely among the possible birthplaces of Homer, given valid evidence by a number of ancient writers and poets.

Apart from its connection with Homer, the Daskalopetra rock is also considered to be the altar of a pagan god. 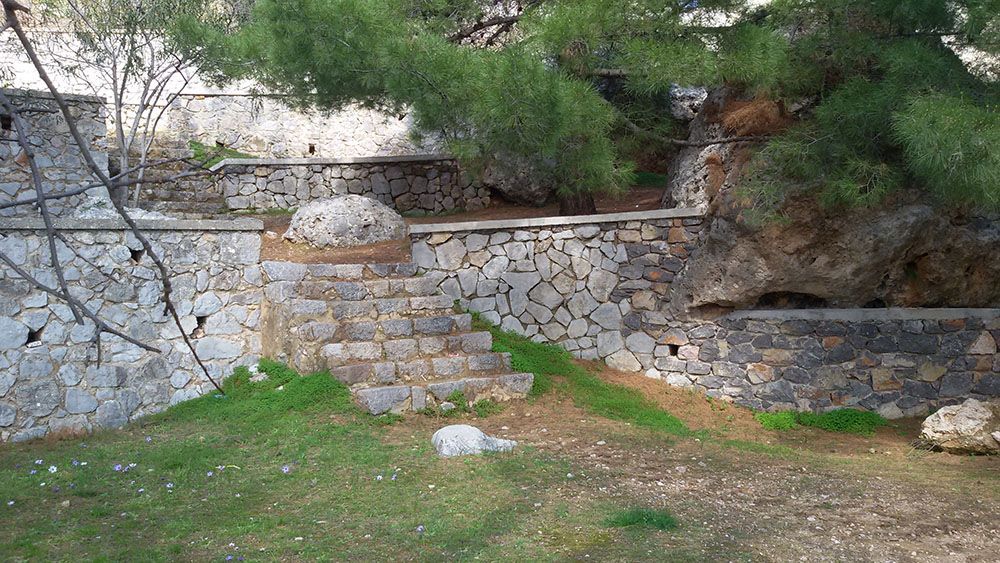 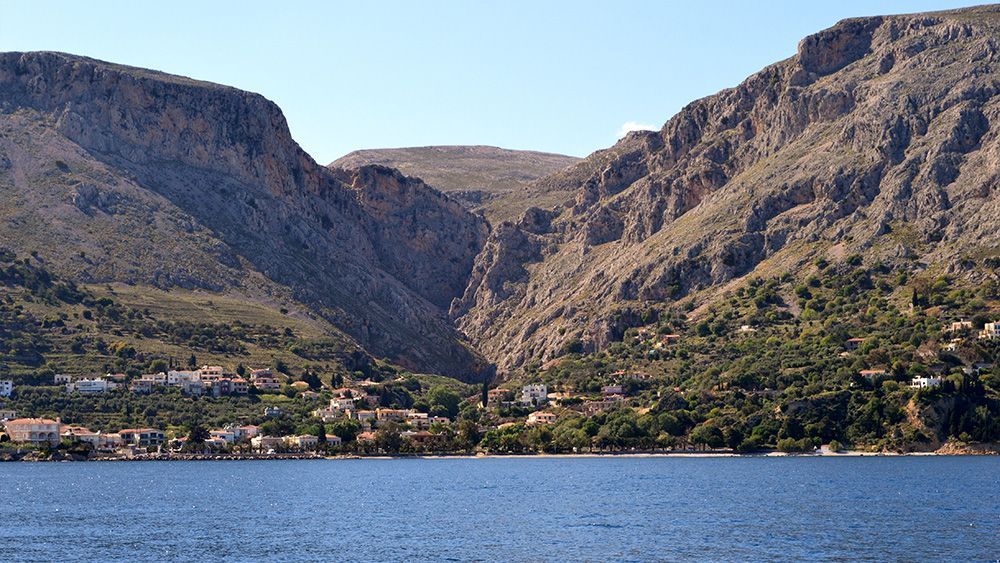 At the steep slopes of Prophet Elias hill
+

At the steep slopes of Prophet Elias hill, at the seaside settlement of Emporios, archaeological excavations have brought to light ruins of a settlement dating back to the early years of the 8th century B.C. The site of the settlement is strategic given that from there, the shores of Asia Minor, Samos and Ikaria could be seen.

At the plateau section of the hill, slightly lower than the highest peak, at a 250m elevation is the settlement’s fortified Acropolis with the Megaron (the leader’s seat) and the altar of the Temple dedicated to Athena. Outside the Acropolis, on the steep slope of the hill is the main settlement with over 50 houses built on spacious level ground. Yet another sacred temple has been excavated on the South side of the Emporio harbour.

If you would like to visit the archaeological site during the summer months, choose a time of the day that is cooler. The archaelogical site remain open until 15:00. 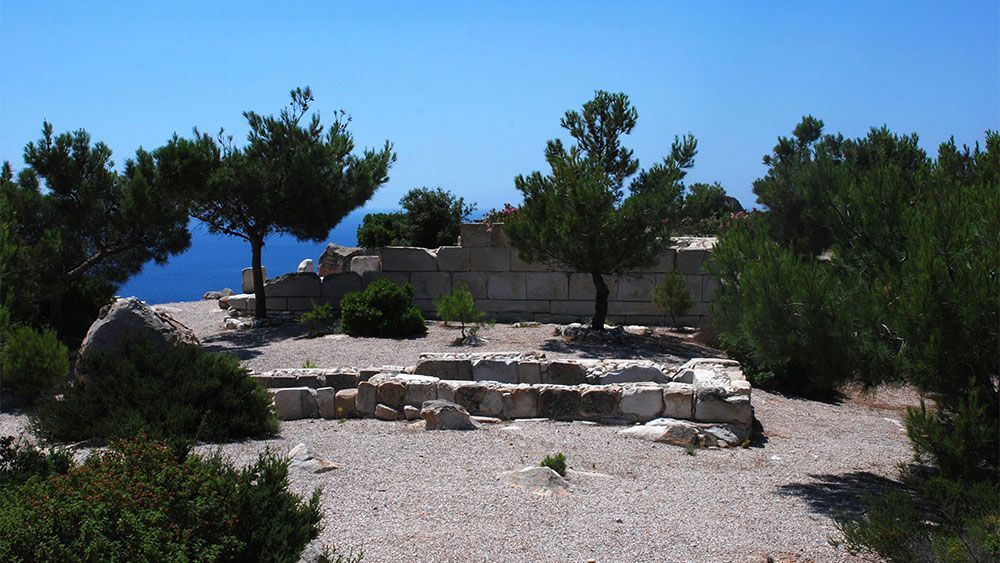 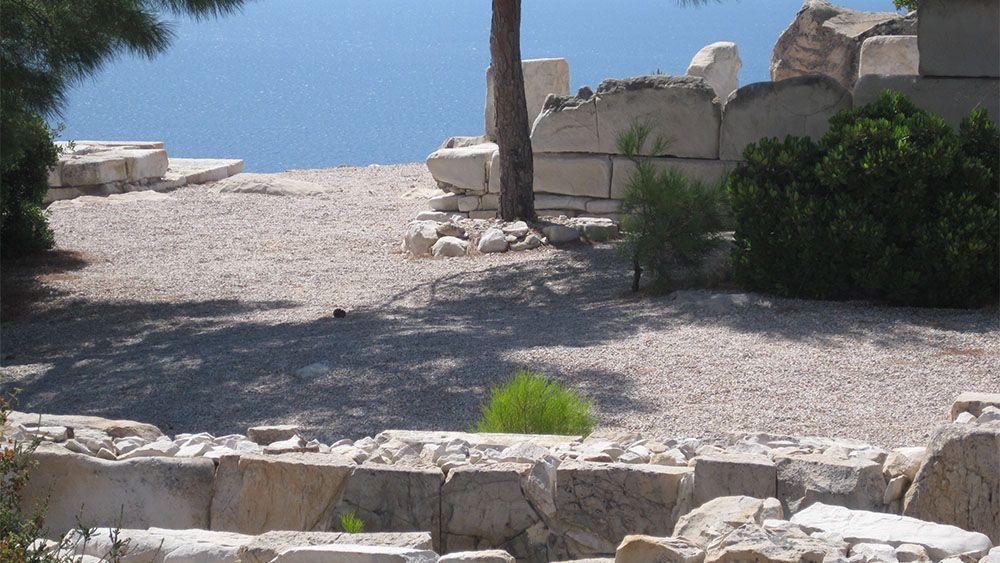 At a low hill at the bay of Fana
+

At a low hill at the sheltered bay of Fana, there are remains of the temple of Apollo of Fana (Fanaios Apollon). The small chapel of Agioi Theodoroi is nowadays standing at the same site.

The site is considered the Delion of Chios. Legend has it that Delos, Apollo’s birthplace was revealed to his mother, Leto, here. Hence the term “Fanaios” which mean the one that has been revealed. 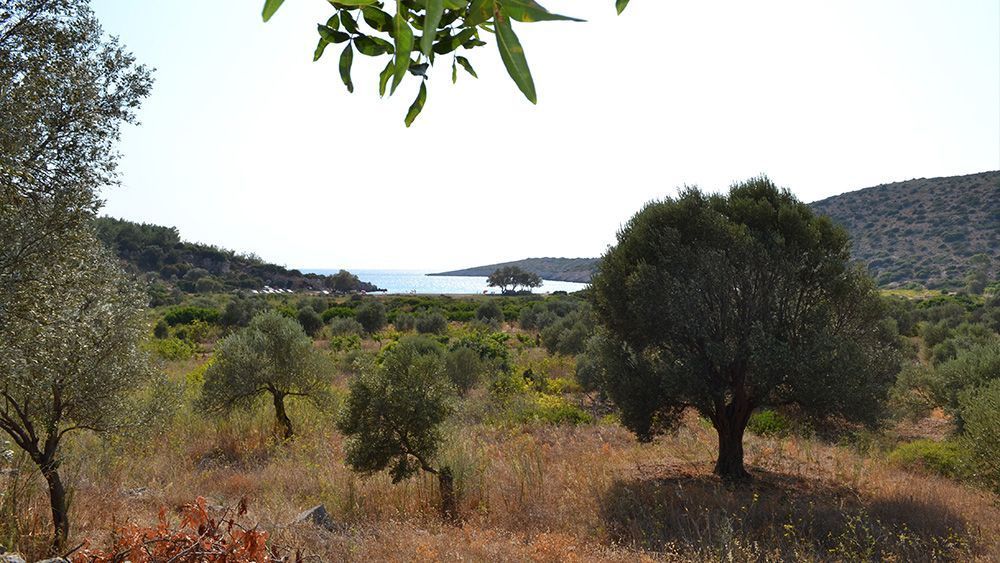 Remnants of the temple built at the end of the 6th century B.C. as well as the sections of the "perivolos" (enclosure) have been preserved.

The Temple of Fanaios Apollo was not only important for Chios, but for the wider area of Ionia. It was famous in Egypt too, as the evidence from the series of Egyptian scarabs that were found during the excavations shows. 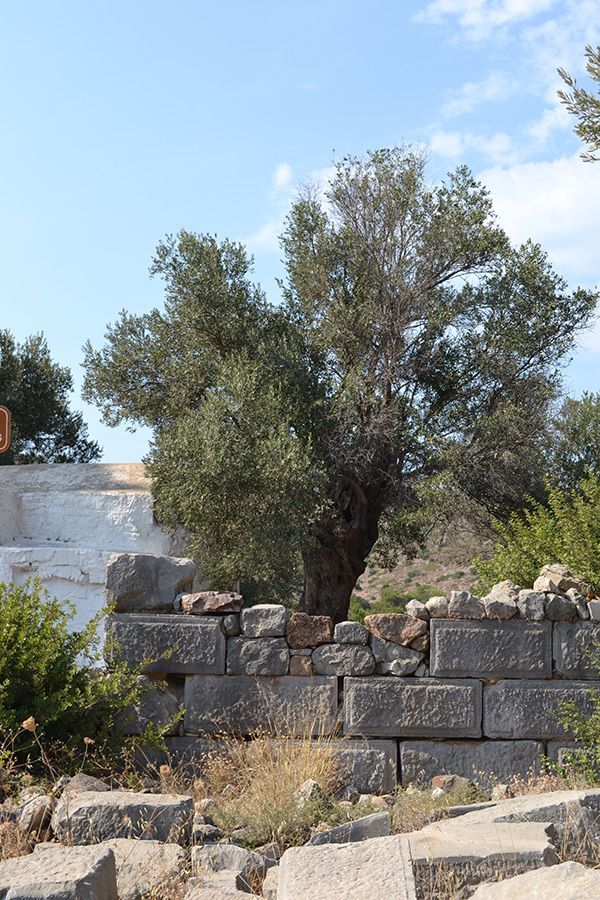 The so-called Mystras of the Aegean
+

Anavatos is a Medieval - Byzantine tower-village that is found in the central region of Chios, at a 16-kilometre distance from the town. Hidden from sight, built at the top of a cliff and plunging into a large granite rock, it forms quite an impressive sight. Although deserted nowadays, the village still preserves its history, a sensation often encountered by visitors when wondering through its stone-paved streets.

The Greek War of Independence (1821) and the Massacre of 1822 describe an important chapter in the island’s history and are directly associated with Anavatos.

The Church of the Taxiarchis (the Archangel) is still preserved. It is the only building, which stills stands out amidst this living ghost town. Not far from the wall’s gate, there is an overbearing structure, which protrudes amongst the buildings along the east side. It is the so-called “Three-story” building, consisting of an olive oil press, school and water reservoir and the Church of the Theotokos (the Virgin Mary). Anavatos, with its tower-like houses, arches and steep cobbled roads, emphasises the force of nature and accentuates the supremacy of the heavens.

On the plateau of Mt. Aipos
+

On the plateau of Mt. Aipos, above the settlement of Vrontados, remains of farming and stock raising facilities dating back to the Classic period (5th – 1st century BC) have been preserved. It is remarkable that in some cases the ancient foundations of the retaining walls and fences have been preserved in situ and are used for the same purpose throughout the centuries.

The visitor can see the entire archaeological site from two points, Rimokastro and Astyfidolakko, where two spectator stands have been constructed and information boards have been placed. Those who love hiking can walk from one point to the other, along a specially marked path. The total distance is 4.5km.

The farming and stock raising facilities on Mt. Aipos were organised along the “Ellininostrata” route, the ancient trail with strategic meaning, which connected the Eastern coastal section with the northern and western coastal sections and was in use up until the middle of the last century.

Cultivation and farming is verified from ancient up until more recent times. Remnants of farming and stock raising facilities have been excavated in the areas of Rimokastro, Kambouri Gyrisma, Evriaki; although there are archaeological indications of similar facilities in other areas of the broader levelled region. 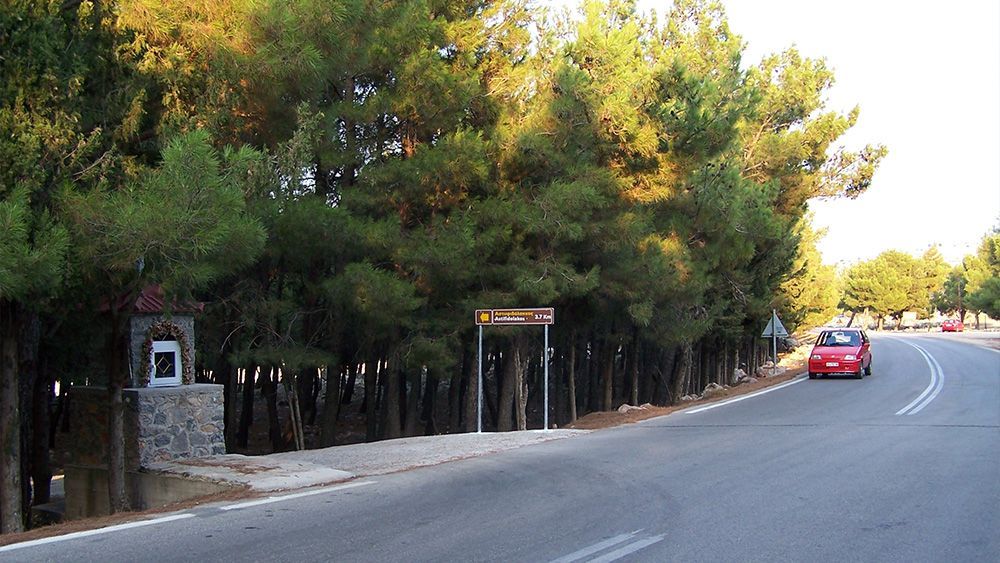 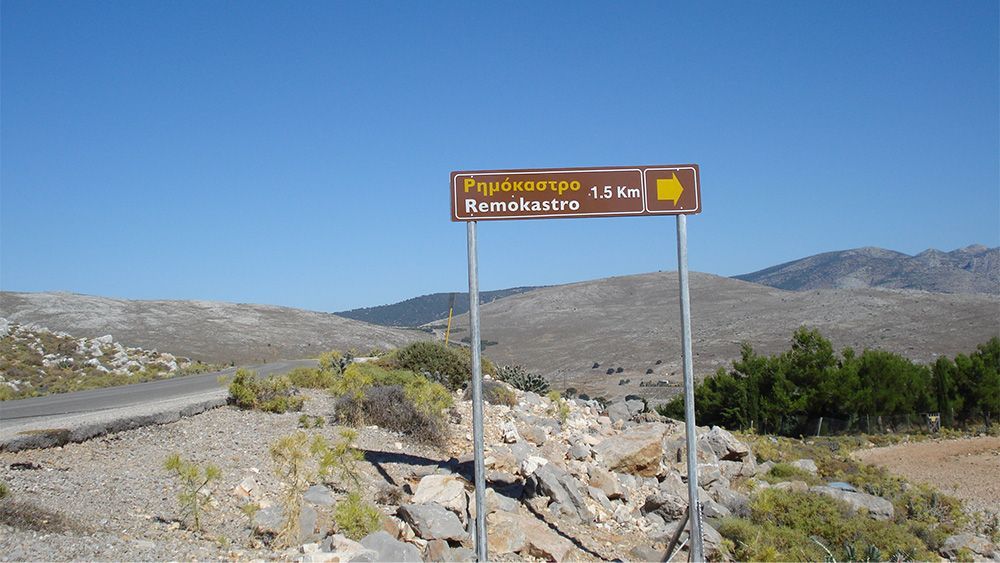 The large stone piles known as “Soroi tis Grias” are mainly located in the area of Astyfidolakkos and are the result of laborious and ever-lasting efforts to claim the land over the centuries for the purpose of cultivating land, which today appears completely arid. The cultivated areas were protected by large stonewalls known as "gyrismata" (turnings) in order to deter the grazing animals from entering. Large water tanks that collected rainwater covered the needs of both humans and animals consumption.

The most significant building complex is that of the Rimokastro built above the gorge of the Krikeli torrent, better known as “Agriou”. The main building complex, which was most probably the owner’s residence, has a symmetrical plan and sheltered areas on either side of the central quadrangular yard along the EW axis. It is most probable that the SE apartment was an architecturally designed tower that was common of homesteads in the 4th century BC.

Ancillary buildings and a large, well-cared-for tank served the farming and inhabitants’ needs. There is evidence that the area was in use up until the turn of the 5th century to the 4th century BC, thus, up until the Roman periods, whilst there are also findings that the area had not been totally deserted until the Byzantine periods.

According to researchers, evidence of the area’s farming and stock raising was linked to a case in Chian history, which borders on fiction. It concerns the revolt of the island’s slaves with Drimakos as their leader; literary testimonies date this between 600 BC to the 4th century BC. The revolting slaves fled to the mountains where they established themselves for a while. The “State” of these slaves created its own rules, whereas Drimakos, their leader, was rewarded for acting in a just manner not only towards his fellow slaves, but also towards his former masters and a monument was erected on his grave declaring him a “Benevolent Hero”. Other researchers point out that the appearance of the homesteads on Mt Aipos do not reflect the temporary characteristics that would be expected from revolutionists’ facilities that are in a continuous “warring” state and usually under persecution. The completion of the excavations in the area is expected to shed light on these speculations.