Some of the most remarkable churches on the island. 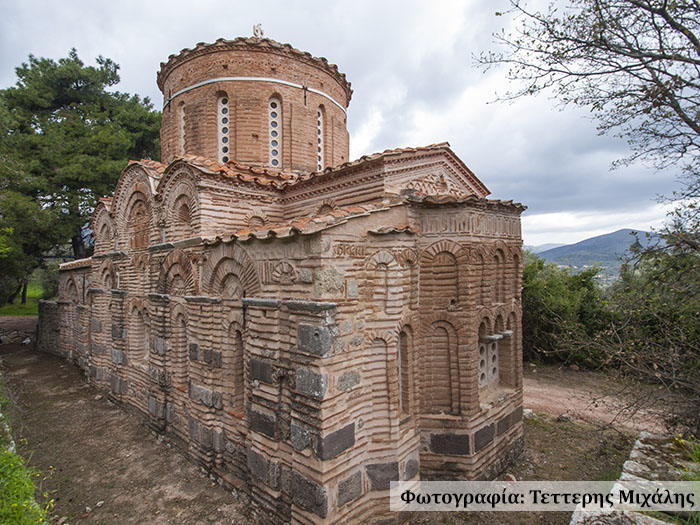 The church of Panagia Krina, at Vavili village, was built around the end of the 12th century. The church was built by Efstathios Kodratos and his wife Eirini Doukaina Pepagomeni who were members of the court in Constantinople.

The church has been well maintained its architecture is that of the “island” octagonal type and resembles the main church (katholicon) of Nea Moni to a small degree. It comprises the dome, the esonarthex and the exonarthex.

The catastrophic earthquake of 1881 destroyed the hemispherical portion of the dome in addition to the smaller dome of the narthex, which was reconstructed shortly thereafter. The majority of the interior walls are covered with paintings, the first of which is dated to the 13th century.

Six different periods of wall painting and decoration are exhibited on at least two layers, thus depicting how Chian art progressed over time. The first illustration (dated around the 13th century) is directly across the entrance of the church, on the narthex and stretches into the main portion of the church where the more recent layer dating to the Turkish Occupation is apparent.

Also located on the narthex, is another example from the Byzantine period, yet of a completely different style. This illustration depicts various portrayals that are not clearly visible. The wall paintings that were detached from the second layer depict 12 prophets, dated to the end of the 14th century in addition to two marble blocks derived from the original iconostasis of the church are all displayed in the Ioustiniani Palace in the Castle (Fortress) of Chios. Portions of the murals painted by Michael Chomatzas in 1734 are also on display in the Byzantine Museum of Chios (Medjitie Cami). 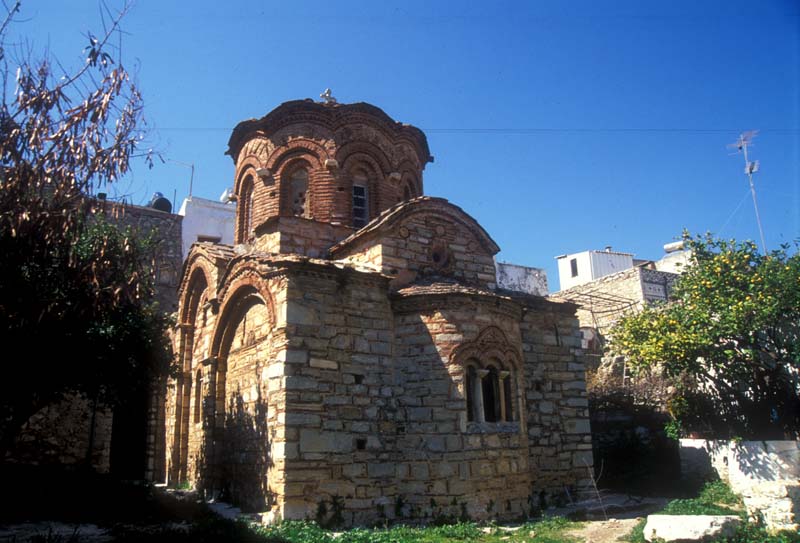 The church is situated at Pyrgi village and belongs to the insular octagonal domed type. This church too is a small reproduction of the katholicon (main church) of Nea Moni. It is a very well preserved Byzantine monument, richly decorated outside with brick patterns (denticulated bands, phialostomia, brick arches). The interior is covered with wall paintings made by Antonios Domestichos, Kenygos, from Crete, in 1665.

An inscription over the main entrance of the church informs us that monk Symeon, who later became the metropolitan bishop of Chios, erected the church "from its foundations" in 1564. This probably refers to a renovation of the monument, since its architectural and morphological features point to the conclusion that it was erected in the middle of the 14th century. 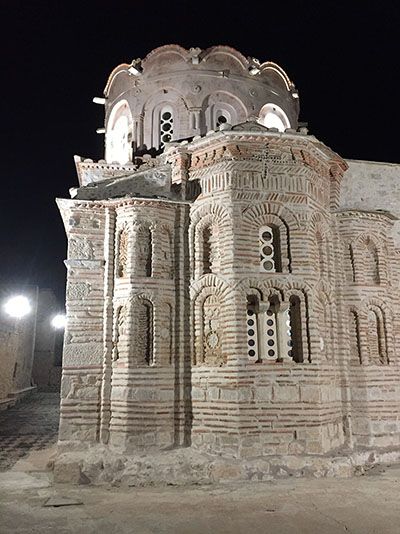 Agios Georgios temple at the village of Agios Georgios Sykousis dates back to the 11th century. It is considered the oldest copy of the Nea Moni Katholikon. It was closesly connected to Nea Moni, since it was the church of a monastery that belonged to Nea Moni. It went through various reconstructions but in late 18th or early 19th century took its current form. Recently the project of renovating the church and revealing the old paintings was completed. You can admire its impressive wood carved iconostasis and the black and white pebbled yard. 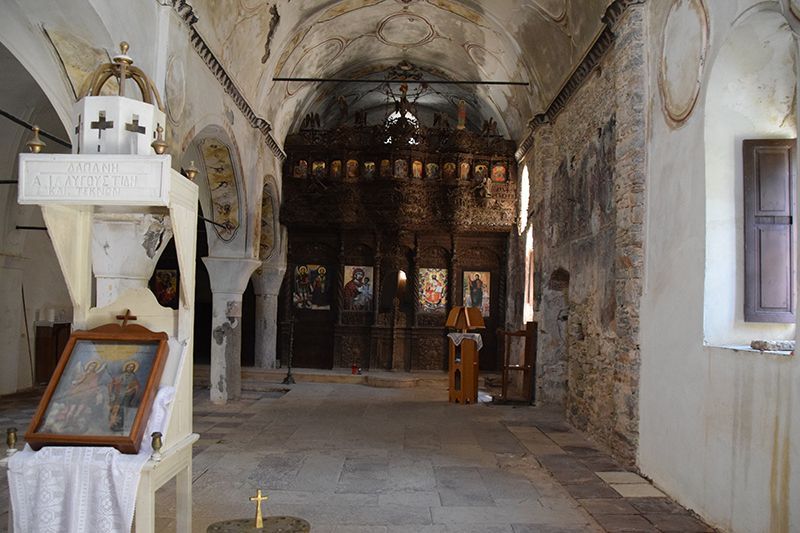 The Church of Old Taxiarchis, situated within the medieval fortified settlement of Mesta, is a vaulted one-aisled basilica, which became two-aisled in 1794. The old area comprises of blind arches with decorative phialostomia and the circular conch of the altar, whereas the north aisle of a cross-vaulted ceiling.

It is worth noting the remarkable frescoes that have been discovered as well as its wood-carved iconostas with many scenes from the Old and New Testaments, work dating back to 1833, which represents the high standard of local woodcarving. 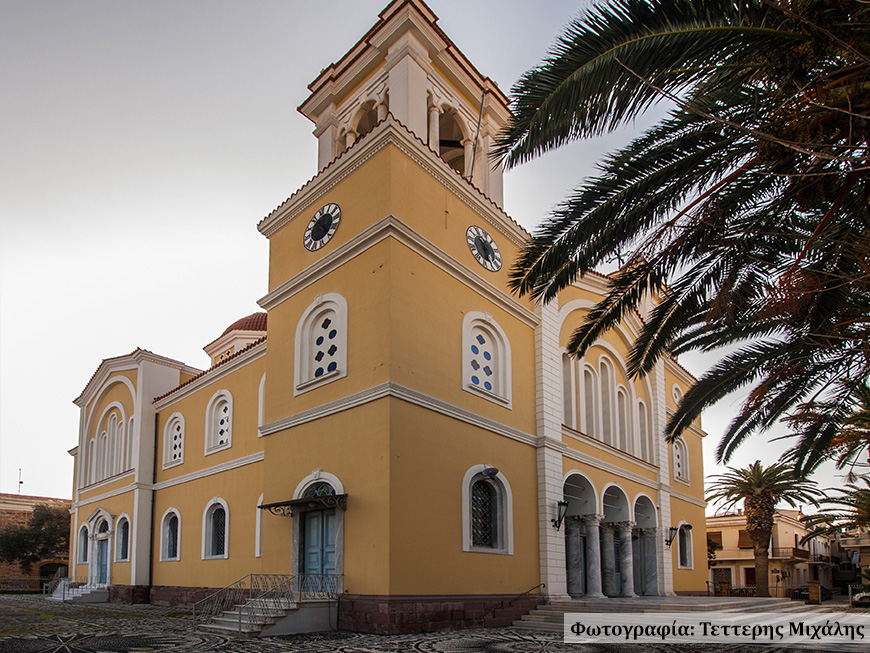 The Chios Town Cathedral (Metropolitan Church of Chios, Sts Victors) stands magnificently in the capital centre next to the Koraes Library. It is dedicated to memory of the three martyrs Minas, Victor and Vincent and is celebrated on 11 November, which coincides with the Chios’ day of liberation from the Ottoman occupation (11 November 1912). In the place of the Holy Metropolis there was once an older church that was built in memory of St Victor by the Genoese, as soon as they occupied Chios.

In Latin script the church is referred to as: "TEMPLUM S. VICTORES IN APLOTARIA". It is because of this Latin inscription that the people continue to refer to the three saints as “St. Victors”. The Genoese church was burnt down by the Turks during the massacre in 1822. In 1838 a basilica-style church was rebuilt and was declared the Metropolitan Church of Chios after the total destruction that the city and its churches had sustained. It was destroyed once again during the tremendous earthquake in 1881 that levelled the island, only to be rebuilt in byzantine style in 1888.

Within the church one will notice the Russian-style chest on the Holy Table, as well as other valuable utensils and objects. The shrine of the martyr of Chios, St. Isidoros (251 AC) that was returned to Chios from Venice in 1967 is of significant importance. Moreover, the prelatic adornment of St Nectarios, Metropolitan of Pentapolis, who entered into monkhood at Nea Moni is also on display.

The impressively designed pebbled yards (liladoto) (early Christian representations, scenes from paradise, geometrical patterns, etc) made with a traditional, local style, can be found in many manors on the island indicating the good spirit and devotion of the craftsmen of that era.

St. George at Chios Castle is the main church of the Castle neighbourhood in Chios town. It was built in 993 A.D. and in one of the oldest temples of the town. It has been a site of worship during all these years. It has been an orthodox church, a catholic church but also Eski Cami during the ottoman times, revealing the different eras and religious groups that have dominated Chios island. In this church you can see a rare icon dedicated to the Saints of Chios island. 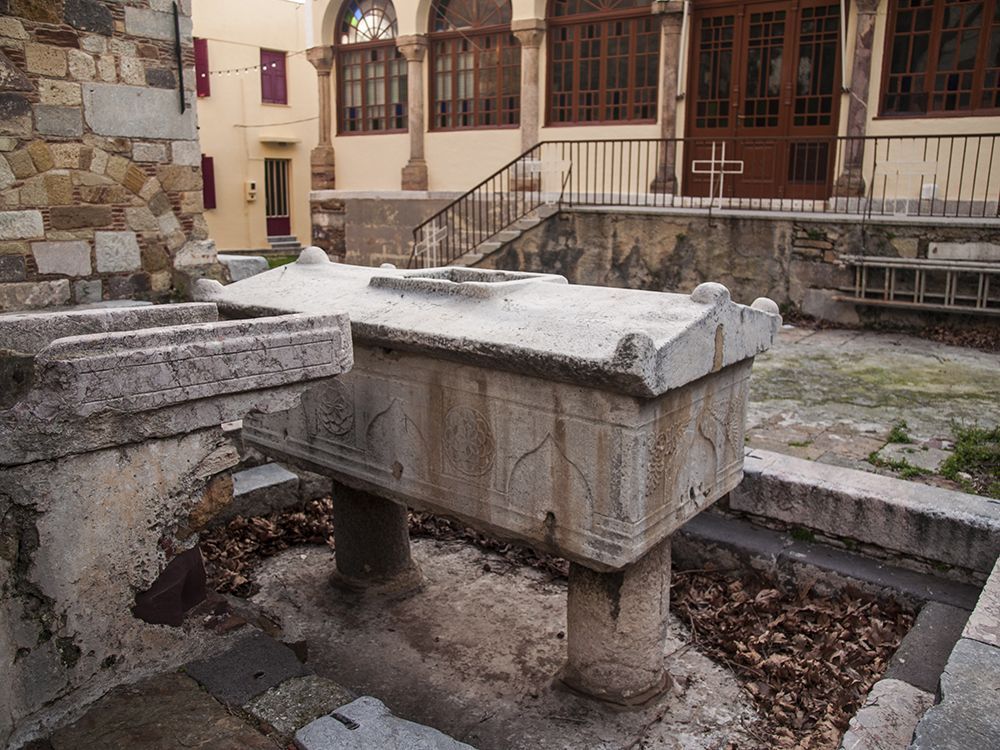