Hiking on an old stone-paved road. 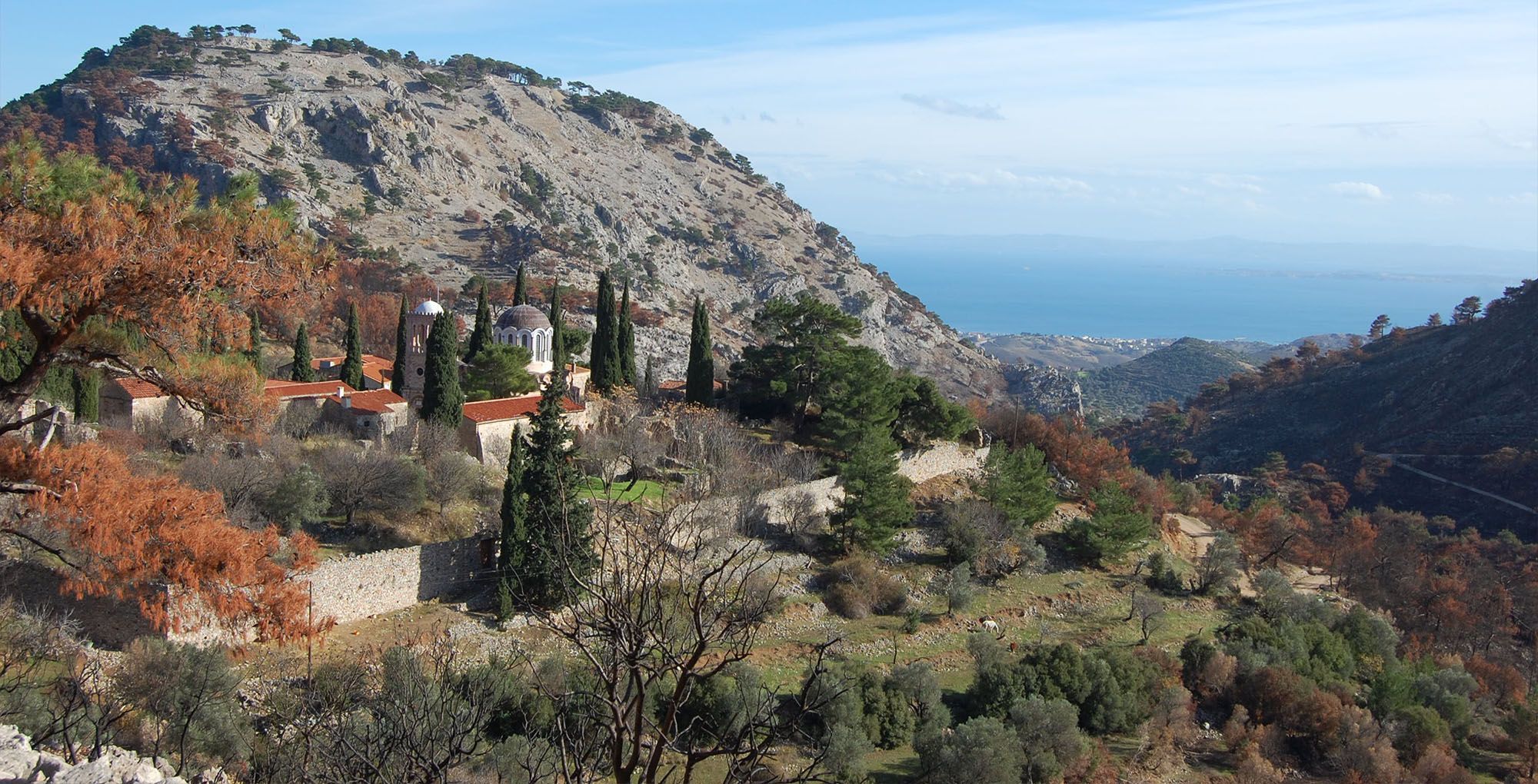 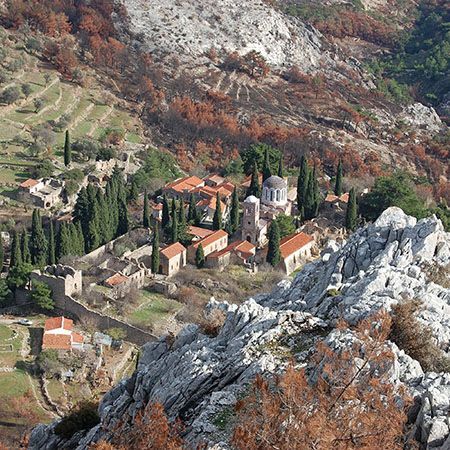 The trail starts from the monastery of Agioi Pateres. After walking on the asphalt paved road for about 200 m, we reach the entrance to the footpath, where there is an informational sign.

A few meters further on, the easily discernible footpath gives way to the old stone-paved road, which is well preserved and relatively wide; it is supported on equally well preserved dry stonework.

For practically the whole way the stone-paved road and the stone steps moderating the steep roadside margin are in good repair and easy to negotiate. The route snakes its way down to the Nea Moni monastery.

Along almost the entire route, we look down on the building complex of Nea Moni. Mt. Penthodos and the Monastery of Agios Markos that stands on its summit are facing us. The view of the town of Chios and the coast of Asia Minor is breathtaking.

At higher elevations along the route the ground is rocky with sparse vegetation and the remains of burnt pine trees. In many places the natural regeneration of the forest is apparent.

The lower we descend, the thicker the vegetation. At the sides of the footpath we see strawberry trees, wild olive trees, wild grapevines, oregano, thorny burnet, and many naturally regenerated clumps of young Calabrian pines.

Close to Nea Moni the landscape changes and we see olive groves and tall cypress trees.

Before we come to the historic monastery, which also marks the end of the trail, we pass the chapel of Agios Loukas, which is the cemetery church for Nea Moni.

Agioi Pateres: This monastery was built in the cave where the three monks, Nikitas, Joseph and Ioannis, to whom we owe the establishment of Nea Moni, pledged their commitment to Christianity. In 1688 the cave was turned over to the monk Jeremiah from Crete, who founded the church. In 1868 the holy monk Pachomios, from the village of Elata in Chios, requested the buildings and transformed them into the island’s most important monastic centre. Women are forbidden from entering the monastery after sunset.

Nea Moni: This may be the most prominent medieval monument in Chios. It was established in the mid-11th century AD, with a grant from the Byzantine emperor. Monastic tradition has it that the monastery church was built ontthe site where three Chians found a miraculous icon of the Virgin Mary hanging on a myrtle branch. The hermits Nikitas, Ioannis and Joseph prophesied that Constantine IX Monomachos, who was at that time exiled in Lesbos, would become emperor of Constantinople. In exchange for their prophecy, they extracted from the future emperor a promise of a generous donation in order to erect a church on the site of the myrtle tree. After Constantine IX ascended to the throne, he made good on his promise and then the conventual church was built and adorned with mosaics. Nea Moni’s mosaics, created by Istanbul artists, are one of the best creations of visual arts during the middle ages in Greece. In 1049 the church was consecrated, and work on it was completed after the death of Constantine in 1055, during the reign of Theodora (1055-1056). In the monastery complex, which is enclosed in a high wall and protected by a defense tower in the northwestern corner, the layout of the buildings follows the model of Byzantine monasteries: in the middle, free on all sides, stands the conventual church, the monastery’s main church in other words, and at a short distance from it is the refectory, the place where all the monks ate in the communal system. The remaining space is occupied by other common use buildings and mainly by rows of cells, which date from the 17th, 18th and 19th centuries. From the original 11th-century complex, only the conventual church, the cistern, the tower, part of the refectory and the Church of Agios Loukas in the monastery cemetery outside the wall have survived. The conventual church consists of the church proper, the exonarthex and the esonarthex, built in the 11th century, the two-part outbuilding and the new bell tower built in 1900, which replaced an older one dating from 1512. The church proper is built on an octagonal plan in the insular style, examples of which have survived only in Chios and in Cyprus. Inside, the impressive mosaics have been preserved.

The refectory is a rectangular building covered by a slightly pointed vault. On the eastern side it ends in a semicircular arch with a three-lobed window. This arch is practically the only part of the original 11th-century building to have survived. The present form of the rest of the building is the result of many interventions and renovations. Inside is the original 11th-century table, 15.7 meters long, whose surface is decorated in cosmati stone mosaics, as are the church’s floors and parts of the walls. The cistern was constructed northwest of the church when the monastery was founded. It is a building semi-basement structure, rectangular in shape. The tower, the monks’ last refuge in case of attack, which served as the monastery’s library for a period of time, now lies ruined. It was originally a three-storey building, but now only the ground floor and the first floor are still standing. Due to its importance from the standpoint of the history of art and architecture, Nea Moni is one of the monuments that have been designated as World Heritage Sites; it is protected by UNESCO.

Due to the morphology of the footpath, it is not possible to use any other means such as mountain bike, since there are steps or abrupt turns in the path at certain places. 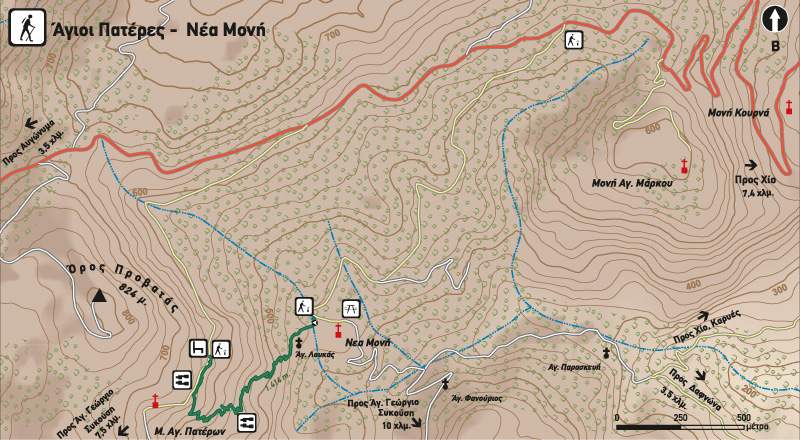