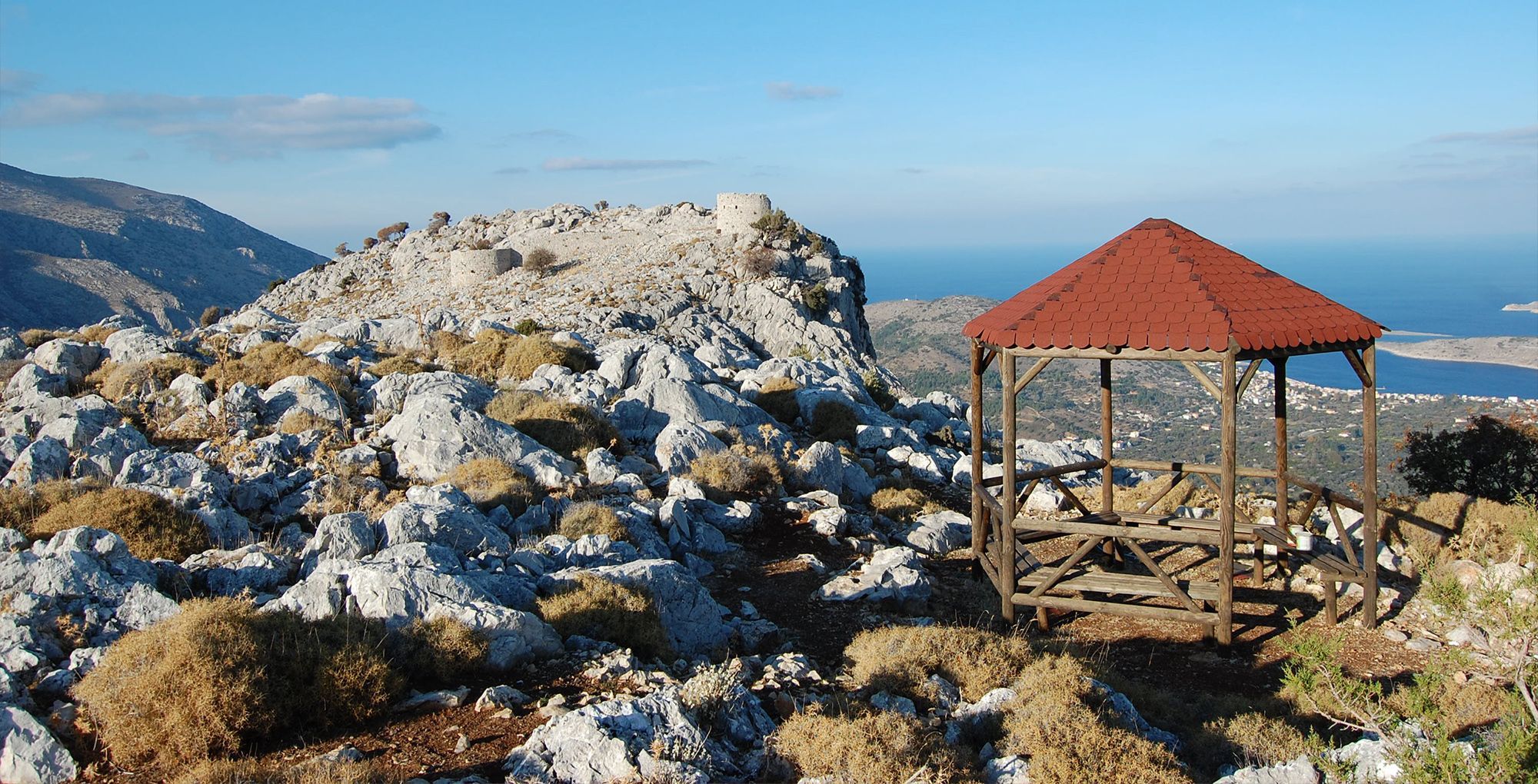 We turn off the road running between Chios Town and Kardamyla onto the road leading to Pityos, and at a distance of one and a half km. from the intersection we see the sign marking the route.
After parking our vehicle, we continue on foot on the stone-paved footpath. The stone paving soon ends and the footpath continues unpaved.

The trek is relatively difficult, due to the rocky ground and steep inclines. Around us the landscape is dry and rocky and the soil mainly clayey.

We continue to ascend, following the twists and turns of the footpath. Behind us lies Koulalas Valley and in front of us looms massive Mt. Gria.

In certain places up near the fortress we can see the remains of the bulwarks, the defense walls built by the volunteers of the Kardamyla Corps to ward off the Turkish army during the battles for the island’s independence in 1912.

Just before we reach the top of the hill, when we reach a resting area with a gazebo and benches we are rewarded with a panoramic view. Great care is needed because of the steep cliff. Spread out below us are Kardamyla, the plain,the harbour, the islets of Oinousses and Delfini and the coast of Asia Minor opposite. On the next summit, a few meters ahead, stands the Fortress of Gria.

A few minutes’ hike takes us to the fortress. We enter its enclosure through a gap where the wall has crumbled and enjoy the panoramic view of the settlements of Ano Kardamyla, Spilia and Marmaros.

The descent is easier. In a shorter time than it took us to climb up, we reach the foot of the mountain and either continue on the same route or turn to our right and wind up in the Koulalas area, with the large, well-built old Genoese well. From there, on the unpaved road we reach the point where we began our uphill trek.

Castle of Gria: A medieval defense fortifi-cation, which served as the citadel of Kardamyla. Tradition has it that it owes its name to an old lady (“gria” in Greek) who climbed up from Kardamyla over the steep rocks, in order to save herself from pirates. Still extant in the fortress are two towers connected by a wall. The eastern tower is semi-circular backed by the wall, and the western tower is round. This whole complex stands on the south side of the flat top of the mountain. There is a sheer dropoff on all the other sides, which obviated the need to construct a defense wall.
Tradition has it that the western tower communicated with the well of Koulalas through a tunnel, which provided the people shut up in the fortress with water.

The well of Koulalas: Built of local stone, it dates back to the Genoese occupation (1346-1566). Stone steps curved in its walls lead to the bottom of the well. There are also bulwarks here. These are the fortified positions of the fighters of the Kardamyla Volunteer Corps during the battles for the liberation of Chios in 1912.

Due to the morphology of the path, it is not possible to use another means, such as mountain biking, as there are points with stairs and sharp turns of the path. A short but worthwhile detour is the route to the Koulalas well.

Via Ferrata: Via Ferrata is the first iron climbing trail of its kind in Greece. Before we reach the cobblestones of the route, we follow a path that leads to the beginning of Via Ferrata.

NOTE: It is used by trained people who carry special equipment.