The Fa area is hot served by public transport. The length of the trail and the steep ground may be tiring in summertime.
Beginning from Fa, we find the starting point for our hike on the asphalt road from Agios Giorgios Sikoussis to Avgonima. On our right, 5200 m. from the junction, we find the sign marking the route. From there an unpaved path begins, sloping gently downhill and easy to negotiate. The route morphs into a stone-paved road dating from the period after the Greek War of Independence – around 1850. This is the road that linked Lithi with the footpaths of central Chios. In a short time we encounter a small ruined bridge, at the point where the torrent ran through Fa, and also well-tended orchards of fig, olive and almond trees. The forest around Fa was burnt a few years ago, but it has undergone a striking regeneration. This stone-paved road is one of the very few that have been preserved in such good condition, and it is an excellent example of road building from that period. It has channels to drain away rainwater, and the dry stonework underpinning is well built: in places where the roadside margins are very steep, the stonework is divided into two parts, with the upper part supported on the lower. Where it is difficult to cross the road, the stonework embraces the limestone boulders and where access is required steps have been formed from stones protruding from the road margins.

Continuing our trail and leaving behind the small plain of Fa, we are now walking alongside a steep torrent bed. Halfway along our route we get a panoramic view of Lithi and its harbour. The route becomes even steeper and has two hairpin turns that counterbalance the change in elevation. There is, however, an alternative: a small footpath that bypasses these turns and makes the route quite a bit shorter. It is not in good condition and caution must be exercised when looking for and using it, since it is extremely steep.

Without other deviations, the footpath winds up at Lithi just above the football pitch, where we turn left towards the centre of the village or right towards the small port of Lithi.

Lithi: At a distance of 23.5 km. from Chios Town, Lithi is one of the villages of southern Chios where the mastic tree (Pistacia lentiscus var chia), from which mastic is derived, is cultivated. Unlike other settlements, Lithi does not preserve the form of the “fortress-village”: the ancient town with its square fortification was encircled as early as the 19th century by new buildings and is now nothing more than a nucleus in the middle of the village, difficult to distinguish.
Lithi’s natural port is the inlet of Lithi and the small settlement there (which has no permanent residents but only vacation homes) known as Lithi-Limenas, with quite a large pier on the western side. It lies at a distance of 1.5 km. from the centre of the village, to which it is linked by an asphalt road. The beach is sandy, an ideal place to swim, and there are a number of tavernas.

Due to the morphology of the footpath, beginners cannot use any other means, such as mountain bike, throughout the trail, since there are places where the stonework is damaged, either on the path itself or on its margins. The route is very interesting, however, by bicycle from Fa up to the point where the hairpin turns begin. Experienced bikers can cycle through the whole trail, but before Lithi, bikes will need to be carried in some places.

Caution should be exercised when planning the itinerary during the summer, because it involves extensive exposure to the sun and can be tiring. 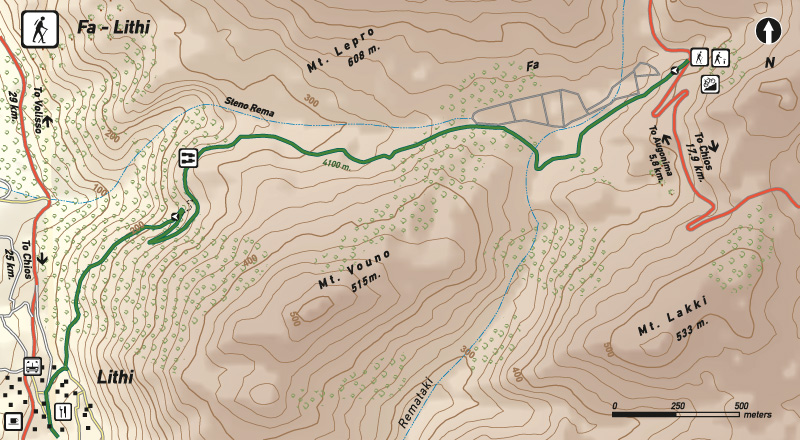