Arriving at Kampia we walk down towards the village square; a few meters before we reach it we take the narrow downhill road through a residential area. After the last house, the trail begins.

At the very beginning of the footpath we see stretching away from us the lush ravine that our trail will take us through.
Following the footpath downwards, we hear the sound of the water from the tributaries emptying into the ravine. The only evidence of these waterfalls is auditory, since the dense vegetation impedes our view of them.

The hiking trail runs down towards the river, and we soon find ourselves walking along the riverbed. At this point, we can see through the dense vegetation a lovely little arched bridge across the small waterfall that is formed there.
We walk for some time parallel to the river, through dense stands of pines, plane trees and wild roses. When we come to the second bridge we cross it; the riverbed is now on our right.

From there the footpath runs uphill away from the river and passes through cultivated areas. Now that we have gained height, we have a panoramic view of the plane trees and other species of riparian vegetation that grow alongside the watercourse. We can also enjoy the picture created by the overhanging rocks on the other side, with the pine trees clinging to them.

The castle of Oria stands above us on the top of a huge sheer rock. Within it is the chapel of Agia Paraskevi and at a short distance the bird observatory. Continuing on our way, the footpath again turns downhill and soon meets the river again. In this area, where imposing cypress trees predominate, there is a small dam; from it begins the stone irrigation channel that carries water to the orchards.
We cross the bridge a little ways further along, and again have the riverbed on our left. We walk alongside the river with the dry stone walls of the orchards on our right. At our feet, the irrigation channel is also heading towards the sea; as it passes it distributes the water to all the citrus trees laden with fruit.

The first farmhouses have begun to appear, along with the road to the beach which leads past them. At the end of the itinerary we reach the sea and the wetland biotope formed at the mouth of the river.

Castle of Oria: Located at the top of the lofty rock which is the site of the chapel of Agia Paraskevi overlooking the densely vegetated ravine of Kampia. The fortress stands on a rocky outcrop and is built on a relatively small scale. It is a typical medieval fortification that skillfully takes advantage of the natural defense provided by the rock. Elements of its external fortification are still visible but none of its interior installations have been preserved. There may have been a central building, on whose site the Church of Agia Paraskevi, dating from Byzantine times, was later built.

Due to the morphology of the route, it is not possible to use any other means, such as mountain bike, throughout the trail, since there are steps or abrupt turns in the path at certain places, in addition to the very steep incline. However, it could be interesting if we bypassed the first part of the steep descent from Kampia.

On the passable unpaved road from Kampia to the Fortress of Oria, we can link up with the main trail at two different points. If we opt for the route towards the sea, it takes us to a point from which it is possible to complete the itinerary as far as the river mouth by mountain bike as well as on foot.

It might be better to avoid beginning on the coast side, due to the very sharp uphill incline in the direction of Kampia.

For this route in particular, mountain climbing boots are judged to be absolutely necessary equipment, since there are places where the soil is unstable making it easy to lose one’s footing. 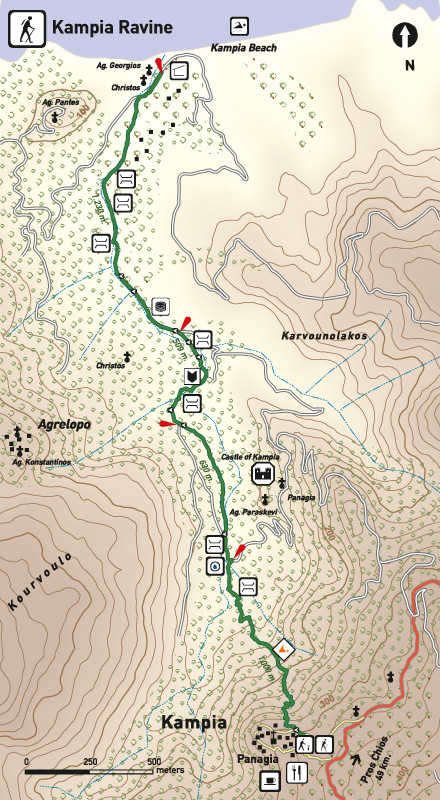