We begin our trail from the Church of Metamorfosi Sotiros in the centre of Volissos. We head towards the road encircling the village, which leads to the villages on the eastern side of Amani. A short distance away we see the wooden sign showing the direction of the footpath. Here begins a downhill footpath with a fence on the left-hand side. The footpath runs down to intersect with a country road, which we take until we encounter, on our right-hand side, a short footpath to the Churches of Metamorfosi Sotiros and Agion Apostolon. We return to the unpaved road and continue to the right until it meets an asphalt paved road. Here we turn left and at a distance of 50 m. we come to an unpaved road on the right. Following this road, we walk through the dry river bed through fields of old olive trees. From within the burnt trunks of the olive trees, new wild olives have sprouted and grown. Much of the land appears to be abandoned, but some of the groves are still tended. The unpaved road reaches a junction with two other roads; here we turn right to reach the area of Vasilika, site of the old Church of Agios Georgios. The church is closed because restoration work is in progress.
We continue on a footpath that leads to the area’s water mills. Our route is over a cleared footpath that runs alongside the irrigation channel that in many places follows the line of water mills. At a distance of 1.8 km. from Agios Georgios we encounter four water mills. At the fourth water mill there is a restign area equipped with wooden seats.
The first mill has been abandoned, but nevertheless we can see the well-preserved sluice and mill race. There was also an old settlement in this area, which is known as “the village of Kokkinos.”
Returning to the footpath, we resume our route alongside the ditch that brought the water from the Malagkiotis River to the cisterns of the water mills. At a short distance from the first water mill, we encounter the second of the area’s mills and also the best preserved, since it is the only one to retain its roof and all of its rooms. The millstones are still to be found inside, along with a well-made fireplace. The mill wheel is missing, but the sluice is in excellent condition and the site of the cistern is visible.
The third water mill is lying in ruins, apart from its sluice, which is fairly well preserved. In its demolished interior the millstones can be found under the debris, along with the rhynd.

At the end of the footpath stands the fourth water mill, with one millstone left in its interior. It belonged to the Kagiantas family and dates from 1906. Next to the mill we see the ruins of old buildings that apparently were used as storehouses for grain.
At this point we again meet up with the unpaved road next to the river which leads to the chapel of Panagia ton Loutron or Neromylon and the fifth water mill. We take the unpaved road, and about 200 m. further, a small sign on the right points to the footpath alongside the river leading to Panagia ton Neromylon (“Virgin of the Water Mills”).
Continuing parallel to the riverbed, we reach the little Church of Panagia ton Loutron or Neromylon, where a space has been laid out for people to stop and rest. At the end of the trail, there is a meadow where the fifth water mill stands in ruins. There are also an old well with a windlass and various other buildings that were probably used as storehouses.
To return, we make our way back to the fourth water mill. From there we continue to the third water mill, where on our right we encounter the footpath to Volissos. The footpath runs uphill to an unpaved road on which we turn left. On the right-hand side of the road, on the hillside, there is a well preserved threshing floor. We continue on the unpaved road for about 1.6 km. until we come to an asphalt paved road. We have now reached the country road linking Volissos and Chios Town, where we turn right towards Volissos. After about 500 m. a footpath on our right leads uphill to the country road from Volissos to N. Potamia. We ascend the last steps on the footpath and reach the asphalt paved road, crossing it in the direction of the Volissos Fortress. Our trail ends as we enter the village and walk down to the square where we started out. On our way, we pass traditional stone buildings and many of the churches of Volissos.

Volissos: Volissos is the biggest village in northwestern Chios, located 42 km. from Chios Town. It is built amphitheatrically on a hillside. Atop the hill a Byzantine fortress stands in ruins. It is trapezoidal in shape, with six round towers. This was the site of the small ancient town called Volissos or Voliskos; tradition has it that Homer lived here.

The water mills: Although most of the water mills in the area are dilapidated, we can observe them and understand how they worked, which by and large was as follows: A ditch channelled the water from the river to the mill’s cistern. From the cistern, through the sluice the water fell with force into the mill race, where the water wheel was located. Through a steel axle and the rhynd, the turning wheel drove the millstone, which was located in the main room of the mill. The grain (wheat, rye, oats) was ground between the two millstones, producing the flour.

Agios Georgios Vasilikon: The chapel of Agios Georgios Vasilikon has a striking facade with stone columns, arches, and an octagonal dome built of red and white stone. Beside it are the ruins of its castle, the “kubba,” built of stone from the town of Thymiana; the semi-domes and the loopholes are clearly visible. According to tradition, the two storey, roofed in vaults, building was the palace of a byzantine prince in exile, who ordered for the church to be build. Around the church was the medieval settlement of Vasilika.

Due to the morphology of the route, it is not possible to use any other means, such as mountain bike, since there are steps, narrow sections or abrupt turns in the path at certain places.

Alternatively, we can get close to many of the points of interest by car and of course by bicycle, by taking different routes parallel to the footpath. If we start out on the unpaved road from Volissos to Agios Georgios, which runs alongside the footpath on the right, we can first reach the Churches of Metamorfosi Sotiros and Agion Apostolon, continue on our trail to Agios Georgios, and wind up on the unpaved road next to the river, which leads to Panagia ton Neromylon Church. From there we can continue on an unpaved road that runs into the footpath between the third and fourth water mills. We continue to the country road, which we walk on all the way to Volissos.

This alternative route can be negotiated by mountain bike as well as by car, although we would recommend a high-chassis vehicle. 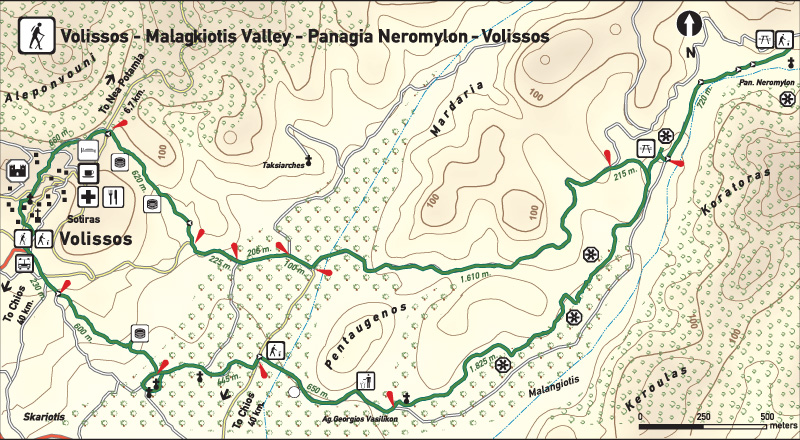